Long time no hear, and I’m really sorry for that. It was a busy time, with a new job, huge project and also military duty in between. But now things are calming down, and so do I. And I’ve got some time for a new blog post.

Recently i stumbled across a newsletter from Synology. They now have a backup tool for Office 365 available which is free of costs for 10 users. Extra license packs can be purchased for adding and renewing additional licenses. That doesn’t sound so bad. But wait. Office 365 is in the cloud, doesn’t Microsoft back it up so that I don’t have to worry about? Well, long story short, NO. There is some retention like deleted items and stuff, and you can modify specific settings. But backing up Office 365 data is all in your own responsibility. There are various backup solutions like Veeam Backup for Office 365 which work absolutely great, and also the recently announced solution from Synology which I’m writing about today. Let’s look at it a little closer.

Unfortunately not every Synolgy NAS system is supported, so please have a look at the list here if your devices is on it or not. Lucky me, i bought a new NAS for my vSphere homelab some months ago which fits perfectly for this test setup.

Synology has plenty of information about Active Backup for Office 365 on their website.

Some of the features:

But now let’s talk tech and let’s dive into the setup and configuration of Active Backup for Office 365. 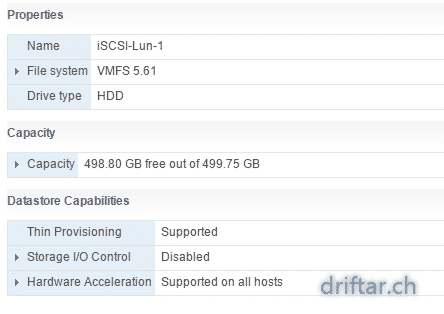 Today i was working with storage topics. I tried to create iSCSI connections in my vSphere homelab and tried to figure out how to connect or mount iSCSI storage. I had already some iSCSI storage connected to my nested ESXi hosts. But i felt as there is something not correct. And i was right. After some research on the internet i’ve found out that you should take another approach to add iSCSI storage as i did in my previous post. There is a way that your new iSCSI storage on your Synology NAS is fully vSphere and VAAI compatible. Let me show you how you do that.

Now your hosts are ready to get connected to your VAAI supported Synology NAS. Let’s create now the iSCSI LUNs in the next step.

Recently i ordered the last piece of hardware for 2016 for use in my VMware vSphere homelab. I failled in the fourth VCP exam in December 2016 and that gave me the kick to extend my homelab a little, and look into storage stuff in detail.

I had some ideas in mind and received good inputs from my fellow homelab colleagues, but there are so much possibilities for extending storage. There are various NAS manufacturers and storage vendors. You can “extend” your storage even virtually with some virtual storage appliances. But i have to keep my budget small, well as small as possible for my needs. I don’t have a sponsor (would be nice indeed). So for the extension of my homelab any storage device other than a NAS costs way too much money. And i want to use real physical existent storage, so also a no-go for virtual storage appliances (which also requires some physical storage in the back end). This made the field of choice at least a little smaller, not much, and i’m still kicking out some devices to find the one which suits my needs the best.

Another point is network connectivity. My decision was to have four network ports on this specific NAS device. It should support link aggregation, load balancing and failover. The NAS device should also support NFS and iSCSI protocols so i can reach it from my ESXi hosts and use it. It would be the best for the integration into my homelab when i’m already familiar with a specific kind of device / operating system / manufacturer. Yes, i know, that’s not a real decision maker, at least not the best. But why struggle if there exist easy to setup systems? And last but not least it should be supported within VMware, for example with VAAI.

With all this points from above i decided to go for a Synology NAS device.

The base system is a Synology DS1515+ NAS device. The technical specifications:

I ordered also three WD Red SATA disk with 4TB each and two Sandisk X400 SSDs with 512GB each. In this configuration i’ll get enough raw storage space (roughly 8TB usable capazity). With two SSD in a Synology multi-bay NAS i can also configure read-write cache (you’ll get read cache only with one SSD).

So let’s get our hands on the hardware…